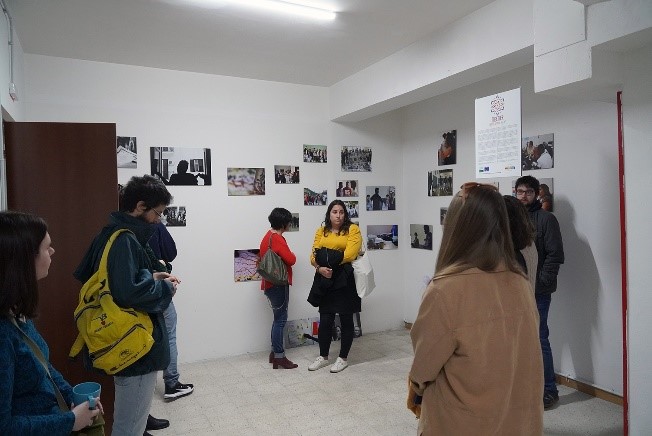 As we near the end of the latest UK lockdown period, due to the worldwide pandemic, it’s nice to look back at some of the trips which we have made to meet with our partners and discuss our projects in what seems like a much happier time.  One of the last trips we were able to make prior to most of Europe entering lockdown was just over 9 months ago, in February 2020, when Disruptive Media Learning Lab gamification researchers, Dr. Samantha Clarke and I, attended the kick-off meeting for our project Escape Racism in Palermo, Sicily.

Our trip began with a memorable train journey through the high wind, flood, and broken power lines that were left behind in the wake of Storm Dennis.  This resulted in our train to Stanstead Airport being halted 15-miles from its final destination and a frantic rush to catch one of the few local taxis by everyone onboard.  However, thanks to Prof. Sylvester Arnab and his Uber account, we made it to Stanstead with enough time in hand to eat a hastily grabbed sandwich before boarding our flight.  Landing in Sicily late at night, we arrived at our hotel just before midnight, tired but excited for our meeting the next days.

The following morning, we woke early and took our first look at fabulous Palermo as we made our way to meet our Escape Racism partners face-to-face for the very first time.  After a short taxi journey, we arrived at the CEIPES building, known as ‘chambers’, in the ‘Auditore’ district of the city.  This building itself has an interesting past, which the staff at CEIPES are extremely proud of, having been confiscated from the mafia it is now used as a base for CEIPES to promote the rights of the community, especially those people with fewer opportunities in life.

On entering the building, we were given a quick tour of the CEIPES offices by Irene Capozzi, CEIPES Education and Training Department Coordinator, before being seated and enticed into playing a game within which each attendee was asked to roll a set of dice with images on and tell a story about themselves based upon the result.  This was an interesting icebreaker, which everyone seemed to enjoy, with the added benefit that we learnt a little bit about each other from the stories we told.

Our first session soon turned to more serious work, with each partner presenting an overview of their various institutions and the work that they performed.  Our presentation providing and overview of Coventry University and the disruptive thinking about education which occurs within the DMLL.  The presentations were quickly followed by discussions about the Escape Racism logo, with two options being presented and discussed.  With a winning logo selected, talk turned to the materials which would be included within the project.  This saw project partners scribbling ideas onto the walls of the office and making connections between them before determining the materials that would be utilised and distributing the workload amongst the team.

After lunch, the serious business of creating escape rooms began, with the team playing a few games created and presented by our partners from Associazione Eufemia.  These were great fun and gave each of the team a basic understanding of the principles which go to make a great escape room experience.  With our gaming session over, the day was rounded off with discussions about the project agreement, the work to be completed, and financial matters.  The team then disbanded back to their respective accommodation for a short break before meeting up later that night for an evening meal.

The following morning saw everyone back at the CEIPES building to continue our discussions about the project, the project agreement, and materials to be created.  This was interrupted by lunch at the typically Sicilian restaurant Casa del Brodo dal Dottore, or Doctor Broth.  At the close of the second day, much had been discussed and agreed, making the meeting a great success.  Each of the partner attendees had formed new friendships with each other.

Prior to our flight home, we had some time to explore the city of Palermo for ourselves.  Starting at a marina and small bean local to our hotel, we walked into the city via the Quattro Canti, Four Corners, district before discovering Palermo Cathedral.  Heading inside, we found some peaceful respite from the bustling streets and sat taking in the sights of saintly statues and holy relics whilst peacefully contemplating life.  After this, we spent some time photographing parakeets flying freely through a small area of parkland and ate an evening meal in a small side street restaurant whose owner showered us with free samples of his food.

The subsequent journey home was thankfully uneventful, and we arrived back in the UK just after midnight feeling tired but happy that our kick-off meeting had been a great success.  The Escape Racism project and partners have since created a raft of materials including a 150-page theoretical handbook and pamphlets for dissemination.  We have also completed training sessions related to the design of escape rooms and begun to create our own project-based games.