Piloting Homeless Monopoly in the Community 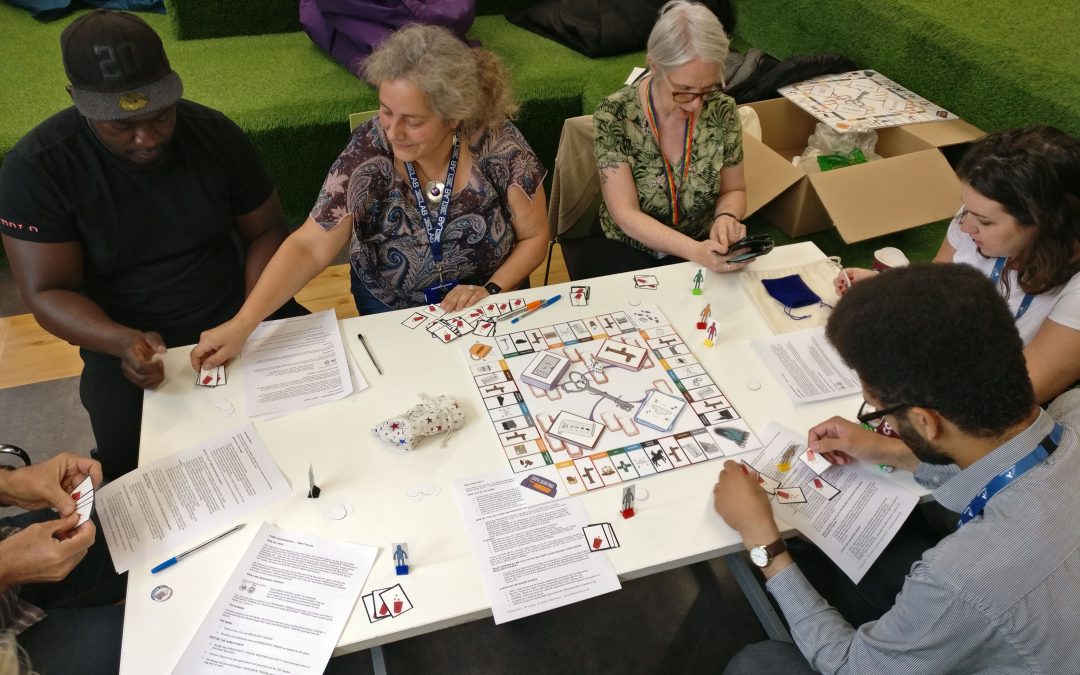 We place a big emphasis on the power that games and playful, creative experiences can have in a wide range of academic contexts, but gamification can also be used to explore pressing social issues in our community.

This week, we invited staff from Coventry City Council and Coventry University Online to a pilot session of a new educational resource game addressing the issue of homelessness roughly based on the board game Monopoly.

With the help of some funding from the City of Culture, Jackie Calderwood ( a research fellow here at the DMLL) partnered with CU Coventry and Prof Nadine Holdsworth from the University of Warwick to develop a game experience aimed at helping people explore the issue of homelessness in Coventry. Jackie and Nadine worked closely with focus groups of staff and service users from Coventry Cyrenians to create a realistic portrayal of the problems and struggles that homeless people in Coventry (and elsewhere in the UK) face on a daily basis.

The game is currently in the prototype phase, and Jackie has organised nearly a dozen pilot sessions where key stakeholders or interested groups have played the game, reflected on their experiences and offered suggestions for improvement.

Jackie invited staff from the Insights Team and the Participation Team from Coventry City Council to attend a pilot test on The Grass here at the DMLL. Additionally, staff from Coventry University Online who heard about the project at a recent Disruptive Byte asked to take part in the play test.

During the pilot session, eight players battled to gather resources, collect coins and make it through real-world trials and tribulations such as severe weather, addiction, bereavement, and relationship breakdown to get the key to their very own home.

Many of the cards drawn asked players to imagine further their situation as a character in the game or encouraged them to ask one another for advice about how to move forward from a difficult situation. As the players moved through the game, stories started to develop, relationships formed, and a spirit of collaboration broke out in what is ostensibly a competitive game.

Reflecting on the Experience

After the game, the participants completed individual questionnaires and took part in a discussion about their experience of the game. Several commented that they learned a lot about the hidden struggles homeless people face as well as the organisations and agencies working every day to support them.

The game served not only as a good team building exercise but also a useful educational resource for thinking about the causes and solutions related to homelessness in Coventry.

Jackie and Nadine hope to further develop the game to take it from the prototype phase to something that’s ready to produce on a bigger scale. The game was initially developed with secondary-school-aged pupils in mind, so the team hope to complete research on the game’s impact on this target age group.

Once fully developed, Homeless Monopoly would ideally be produced alongside additional educational resources for use in secondary schools, with the possibility for alternative editions being developed for primary schools, higher education settings, and relevant adult groups.

You can catch up with Jackie via her contact details on the DMLL’s About page.